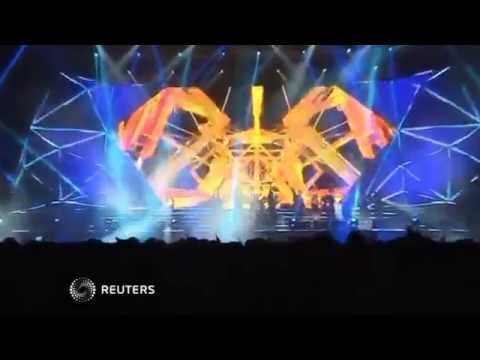 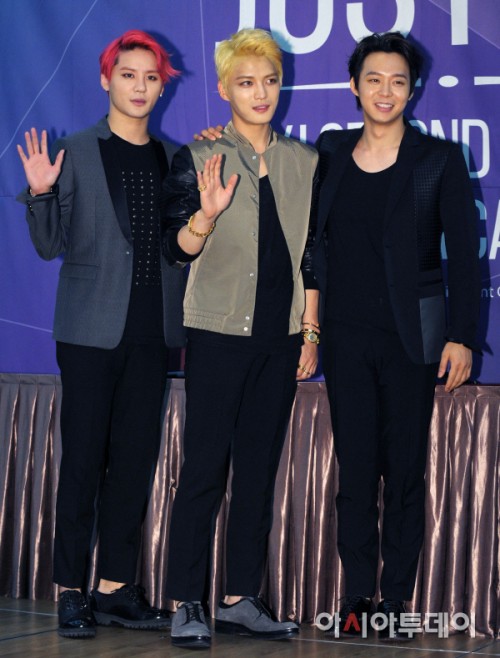 Coming back with the 2nd regular album ‘JUST US,’ JYJ expressed their goals for the concert.

On the 3rd in the afternoon, JYJ held press conference for the showcase and fan meeting at COEX, Seoul. Kim Jae Joong stated that “Despite busy schedule, all members have tried their best to prepare the concert. We would like to enjoy the stage while entertaining all fans”

Also, added to this, “I think what matter is weather condition. I hope it will neither rain or too hot. Hopefully the weather will be perfect for everyone can enjoy.”.

Park Yoo Chun explained “It has been quite a while to perform as ‘JYJ.’ I’m very much looking forward it and pretty thrilled. I have always been on the stage, but this concert means a lot to me.”

Also, he said “I wish we can do best. I hope no one gets hurt. I wish we’ve got big applause at the end of the show because we perform as three, JYJ. That makes me practice hard.”

Jun su showed his ambition for the show saying “It’s been a while to be on the stage as JYJ. I’m very looking forward to it. Popular dancers especially are coming from the U.S to join us at the show. We would like to present the perfect show.”

JYJ has come back with the 2nd album ‘JUST US’ on 29th July and the title song is ‘BACK SEAT.’
JYJ will have a concert under the title of ‘THE RETURN OF THE KING,’ to meet 40 thousand fans at the Seoul Jamshil Main Studio on the coming 9th.

At the concert, they will perform tracks in the 2nd album, including the title song, ‘BACK SEAT,’ and other hit songs. JYJ will go on Asia tour staring with the concert in Seoul.
http://en.asiatoday.co.kr/view.php?key=20140804001311436&series=eng002
issue@asiatoday.co.kr

JYJ is releasing a new album in 3 years since they released ‘IN HEAVEN’ in 2011 September. JYJ had a fan meeting and showcase with 10 thousand fans on August 2 and 3. JYJ Park Yoo-Cheon said, “It’s really delightful to work with 3 of us. I’m happy to perform together, and release album as JYJ.” Kim Jae-Joong said, “I’m looking forward to what we are going to do. I’ll do my best. I feel the same with other members. I’m just so happy to release an album in 3 years, and we can perform together.”About the title song ‘Back Seat’, they said, “As it’s JYJ, ‘Back Seat’ may sound a bit foreign to you. However, I wanted to have it as our title song as we are JYJ. As we are becoming 30 next year, I wanted to pour manly emotion in the music naturally.”
Innolife

JYJ’s free fan service event 2014 JYJ Membership Week has closed its curtains.C-JeS Entertainment, JYJ’s agency, stated on August 4, “2014 JYJ Membership Week, which took place between July 31 and August 3 in COEX has successfully ended. A total of 18,000 fans from in and out of Korea were able to make precious memories through the membership week.”

The exhibition included ‘JYJ club,’ which presented a mix of JYJ’s hit songs and displayed a video of the members DJing, the music video set for the title song Back Seat, the dress room that displayed over 600 outfits that JYJ wore for previous concerts and performances and more. The event also featured a book café where the fans could enjoy looking through JYJ’s magazines while enjoying ice cream, the ‘JYJ theatre’ which displayed the members’ recent activities and behind the scene clips and the sticker photo shop, where the fans could take sticker pictures with the members’ photos in the background. An affiliate stated, “JYJ’s membership week, which has been carried out each year to communicate with the fans, allowed a closer fan interaction this year and their satisfaction was very high. The membership week has already held its third annual event. We will continue to work hard to make opportunities for the fans to interact with JYJ.”

On August 2 and 3, special fan meetings were held for previously selected fans. Over the two days, JYJ met with 4,000 fans from Japan and 6,000 fans from Korea, sharing talks and playing various games, spending good times with each other. JYJ said, “We’re happy that we have this opportunity to make good memories with the fans every year. We would like to continue to spend time with the fans through events like this.”4,000 fans made their way from Japan to attend JYJ’s membership week this year. An affiliate stated, “With some saying that hallyu wave has been dying off in Japan, the fact that 4,000 fans came from Japan to see JYJ is news to be welcomed by the travel industry as well. The fact a large number of fans enter the country to attend JYJ’s membership week shows JYJ’s influence.”Photo credit: C-JeS Entertainment
Mwave