There was an error everytime I want to update my previous article. So, I think I should make a new post.

U can read the previous article in HERE

This is my (probably) my last thought for TGWSS but I dont know yet coz the temptation for NOT only enjoy the show and make nothing is becoming big and bigger each time SBS release something. Oohhhh ChunNi....U really  give me a hard decision.


Almost everyday I’m talking with other Chunsa (JYJers) in LINE and always using LINE sticker and from all Line character, BROWN is the one that really suit Mu Gak. LOL....He’s cute & funny although we’re always complaint....WHY NO Expression. Hahaha....so, it’s Mu Gak right? Hahaha....so, these one that look like Mu Gak. 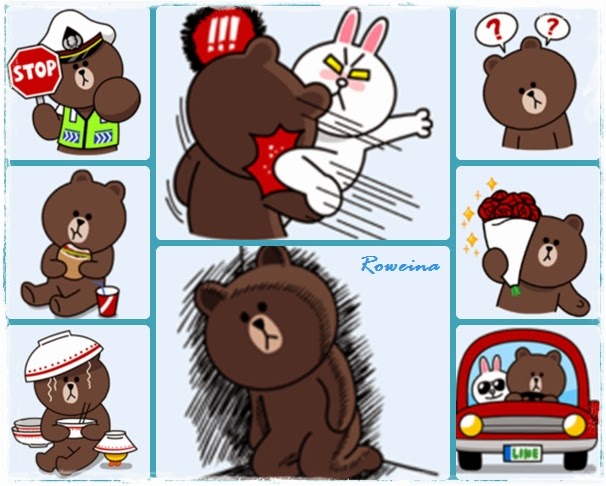 
# MuRim in a car;
# n the last thing is a still/scene that I think we will get it from the drama. The moment when Mu Gak lost his sister.

N finally we get a trailer n I always LOLing everytime watch it, hahaha.....n from the trailer we get this. 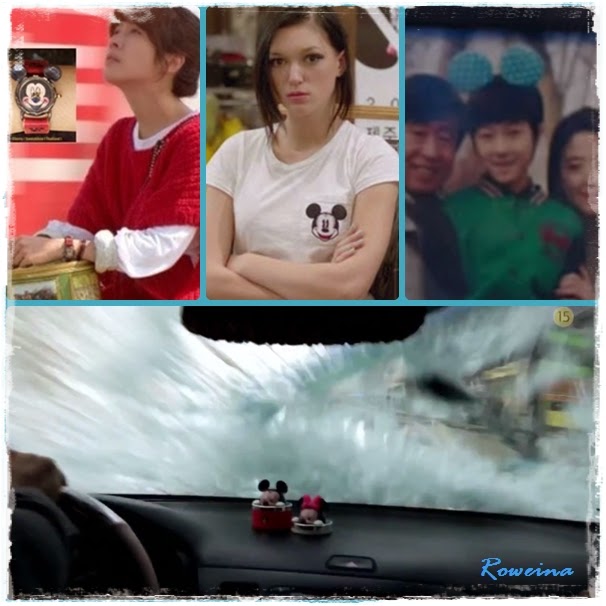 Hahaha...it’s 4th time in a row that Mickey always popped in Micky’s drama. XD....n this time with Minnie. LOL

N we really get the explanation about that Analgesia....he can’t feel anything. 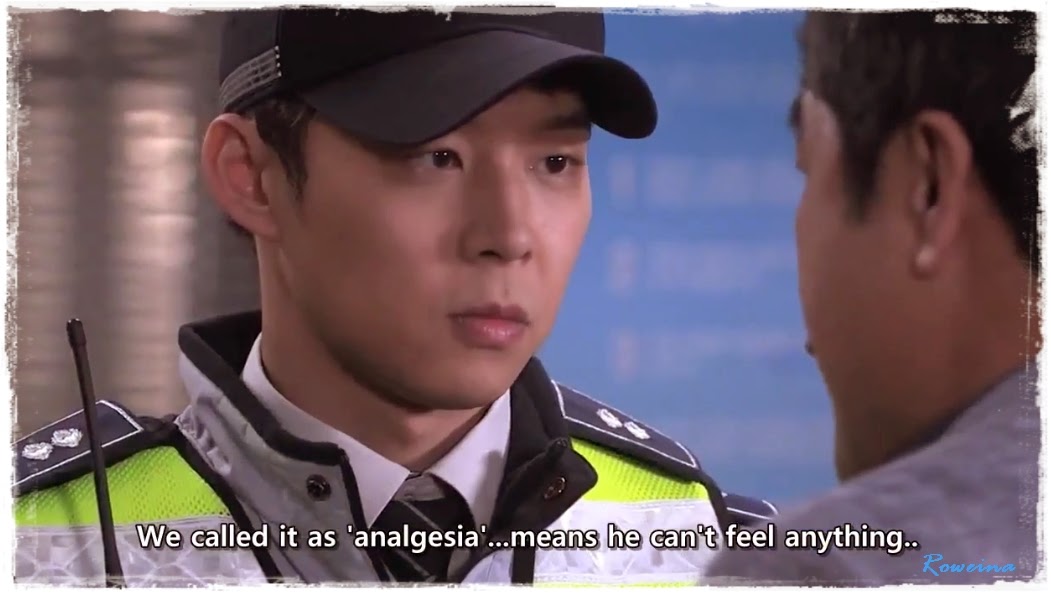 But I think he still can feeling guilty, scare or whatever feeling Mu Gak has on this scene. 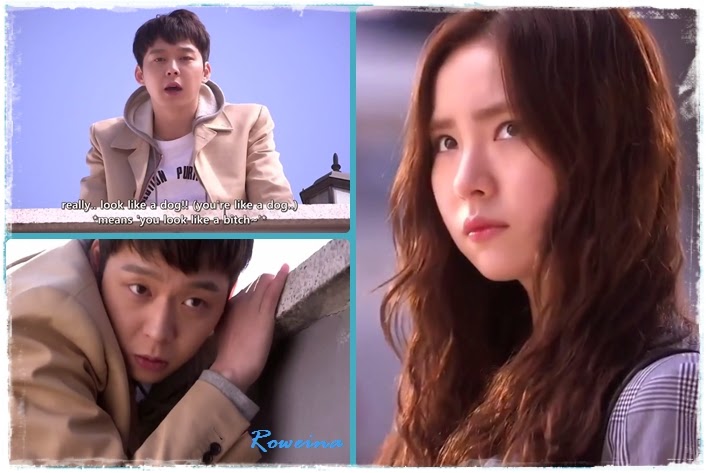 LOL....he call her like that n then realize what he say n then hiding. XD 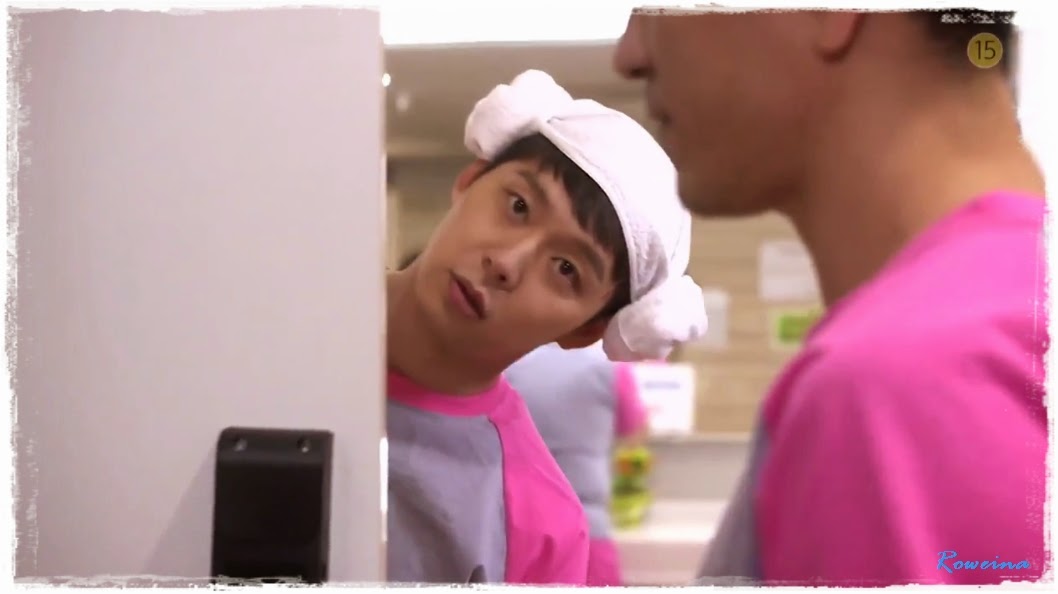 So surprise when see that peek a boo scene.....hahhaa....Mu Gak with his Pucca hair. XD 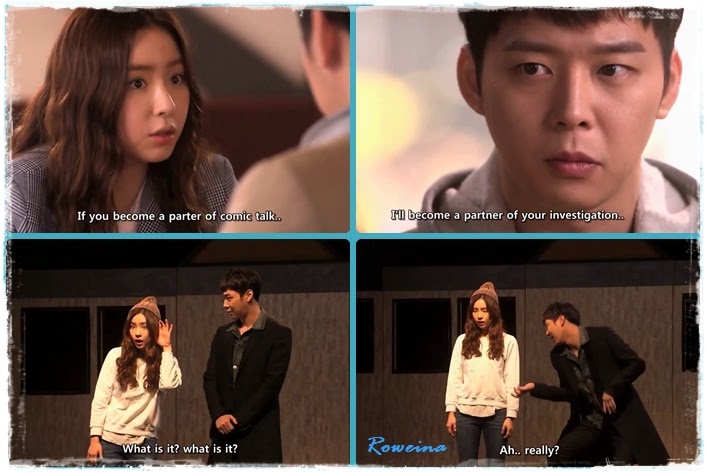 I don’t know how a senseless guy can become a gag man (ChunNi can’t be on variety show but he can give his dorky side on this drama).  I think we will get a good laugh from them. 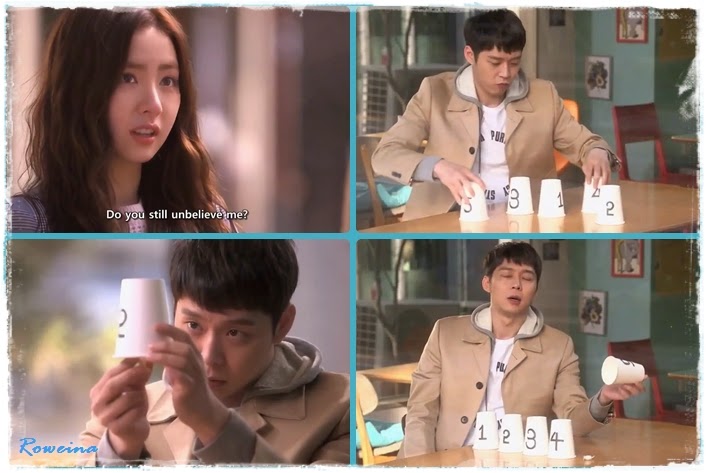 N the trailer ended with a scene that really tell the meaning of the title....The Girl Who See Smells... 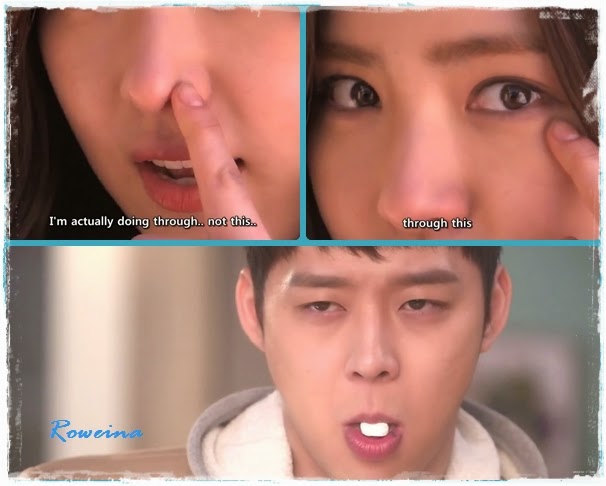 I was so surprise when see something in Mu Gak’s mouth. OMO....he hide it in his mouth.

Beside trailer we also got 1st still from ChunNi n So Hyun....n we really get this. hehe...

I have a high expectation about good chemistry between them n I see it from the still.....n OMG....we even get this Love Sign. I couldn’t believe my eyes that finally ChunNi do that on his drama, XD 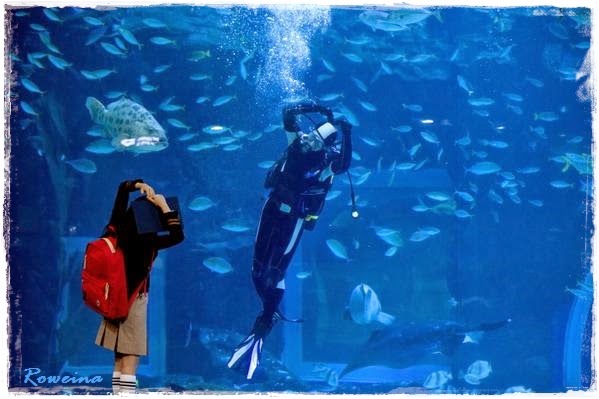 N from the stills I think I can understand how close their relationship n make Mu Gak doesn’t want to eat for day after her death. We don’t know yet if the murder is infront of his eyes or what, but I think I will cry for the 1st time on ChunNi’s crying scene.

Poster of drama/movie is important coz it can tell the story especially if we don’t know what kind of drama/movie is that.  It can attract people to watch if the poster looks interesting although later U like it or not is a different story.

N from ChunNi’s drama,  there were 2 times before TGWSS that I was waiting for his drama’s poster but I didn't get this feeling like I got after see TFWSS 2nd poster. I don't know how to describe this feeling. LOL....It wasn't coz the poster aren't good but those poster only make me want to say..." Aaahhh....nice poster”.  I even said that when saw the 1st poster of TGWSS.

I never chose which one of my favorite but this time I will chose it, hehehe....n I’m sure U know which one is my favorite, hehehe....(favorite doesn’t mean it’s the best coz everyone has different taste n I’m not an expert ).

#1. The Girl Who See Smells 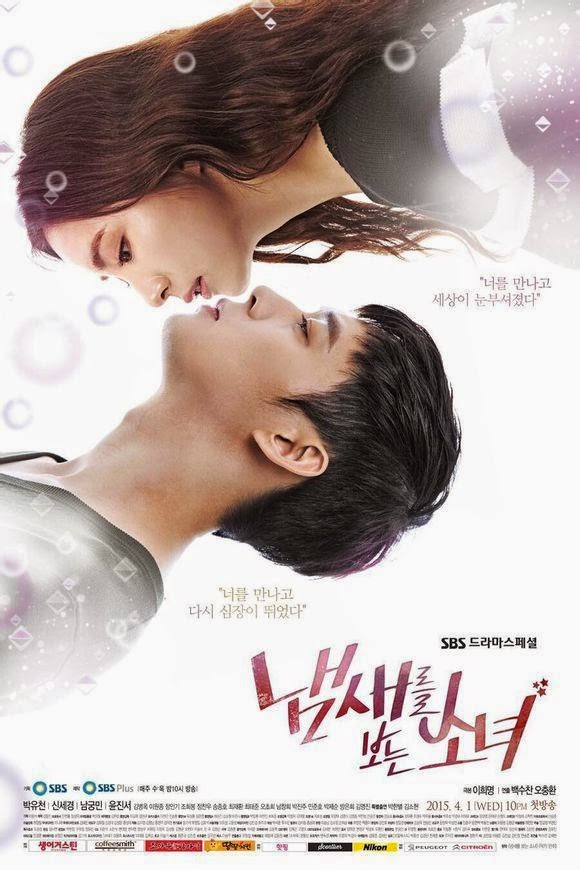 I don’t need to write a long essay for this poster. It just I

The other poster give us Mu Gak in Black represent his emotionless. That black haze is like he has a glommy life n then he met a bright girl n the flower represent SPRING and “springtime”... refer to the season, and also to ideas of rebirth, rejuvenation, renewal, resurrection and regrowth. It’s suit with the story.... 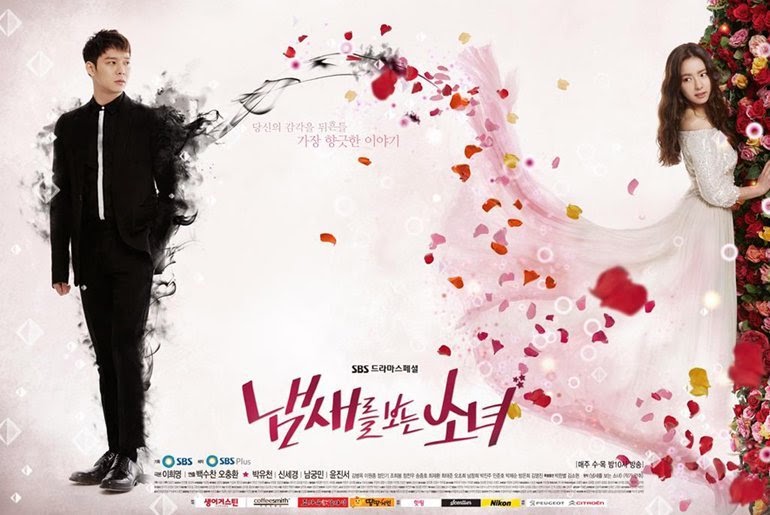 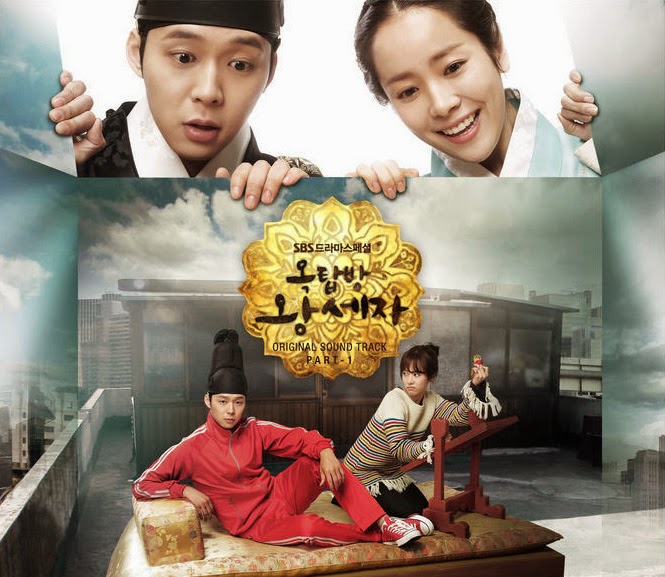 It’s a funny poster n tell the story very well with 2  time dimension, their RoofTop House, the bossy Lee Gak n Park Ha who was really annoyed with him. XD 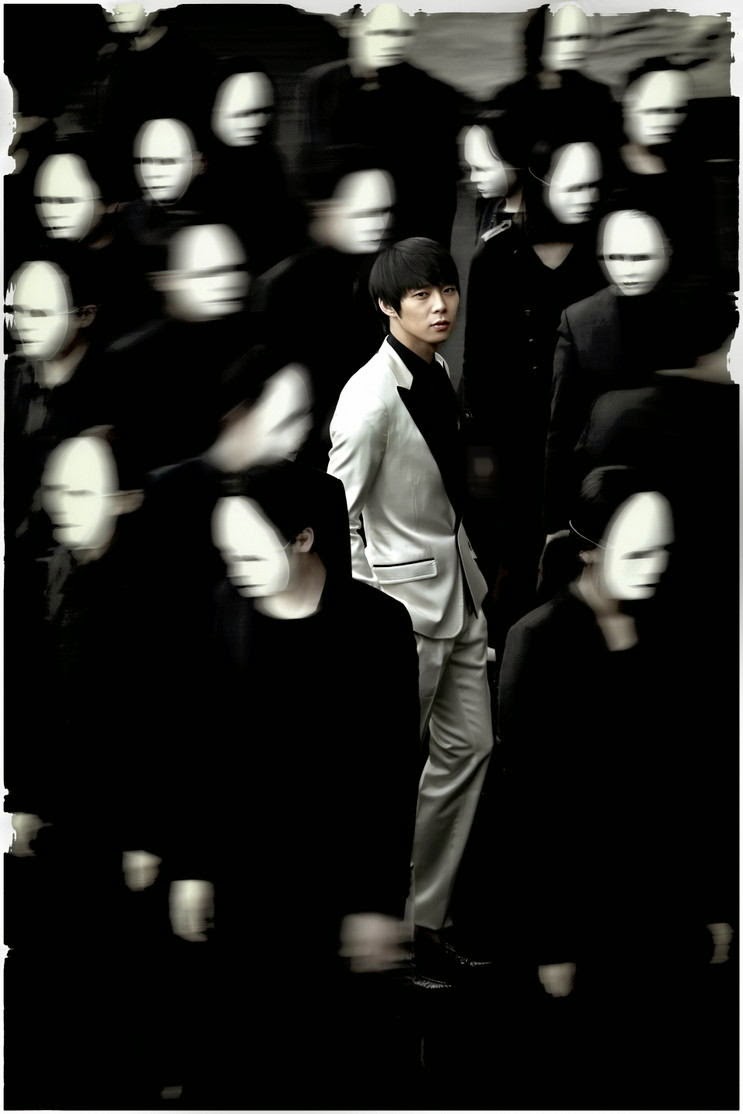 A good concept poster. Song Yoo Hyun standing around people who wear mask. A Mask that sometimes people wear to cover the truth. Tell us the story about a person who lives their life on lie. 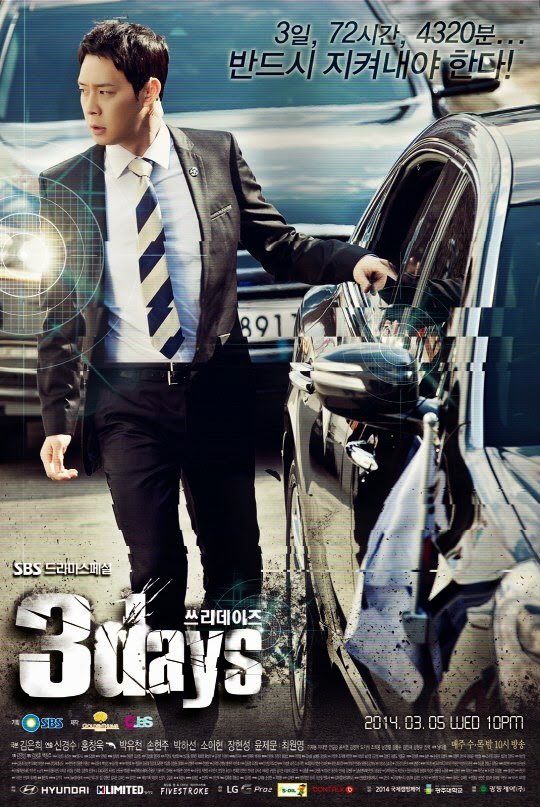 Just looking at this poster. We know what kind of story of this drama. It’s a story about a bodyguard. A handsome bodyguard. XD 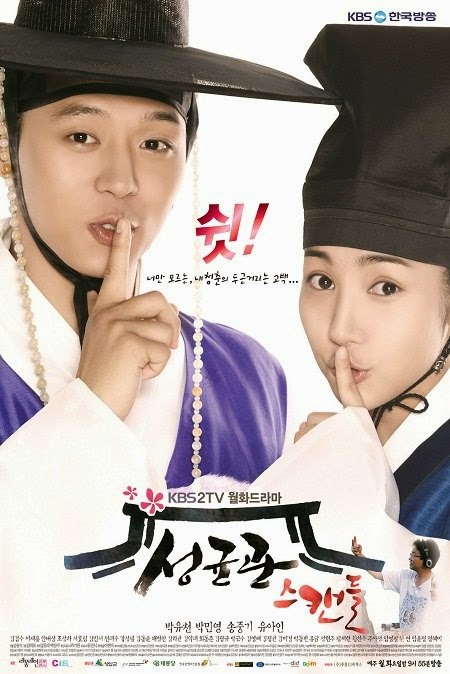 That “psssttt” hand sign told us that on this drama, there’s a secret that should not be told. 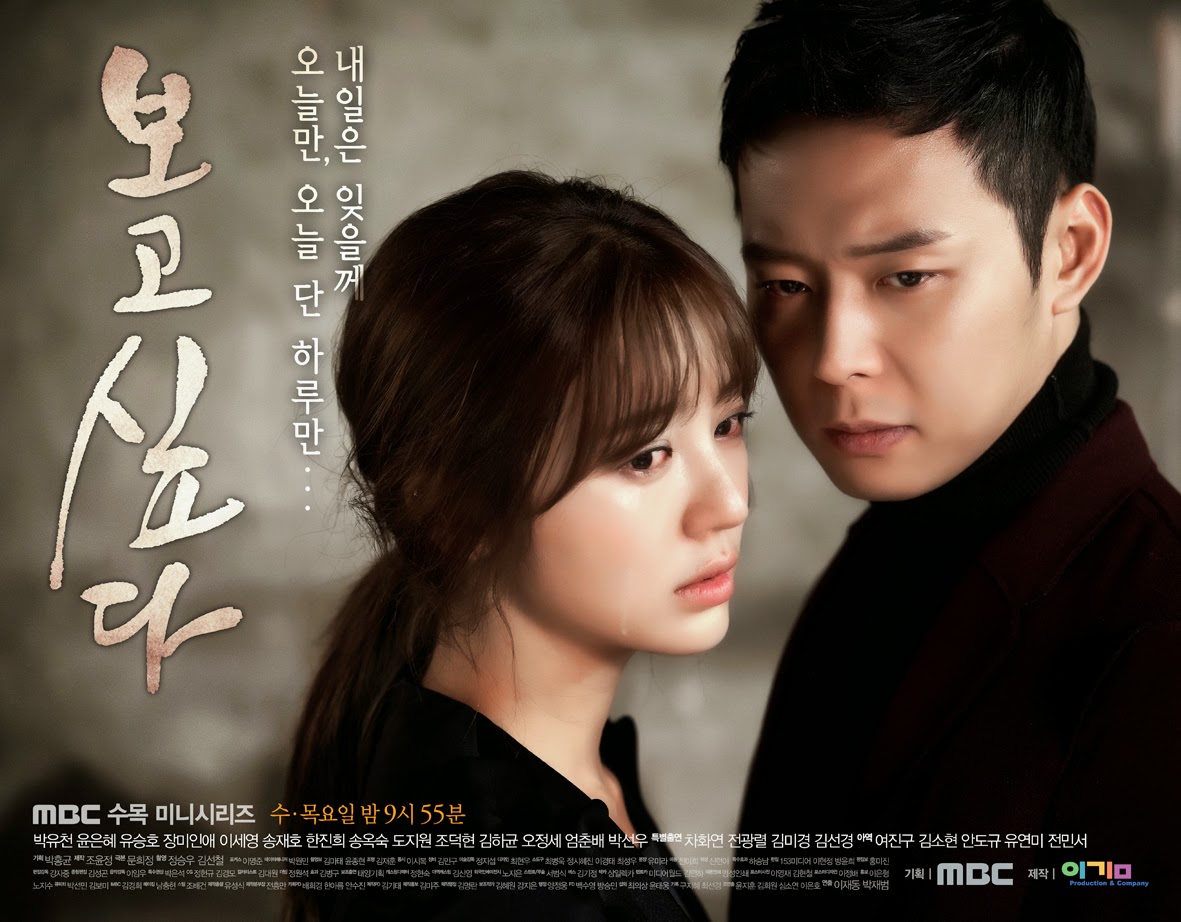 Just looking at the poster we know it’s a melodrama but didn’t really tell the story.

N finally after 5 dramas, ChunNi had a promotion show from his 6th drama (6 the magical number for ChunNi)...Thanks for SBS to made that kind of promotion. Always LOLing when watch it. We got some TGWSS’s scenes from it.

WOW.....finally also can hear he using dialect on drama. 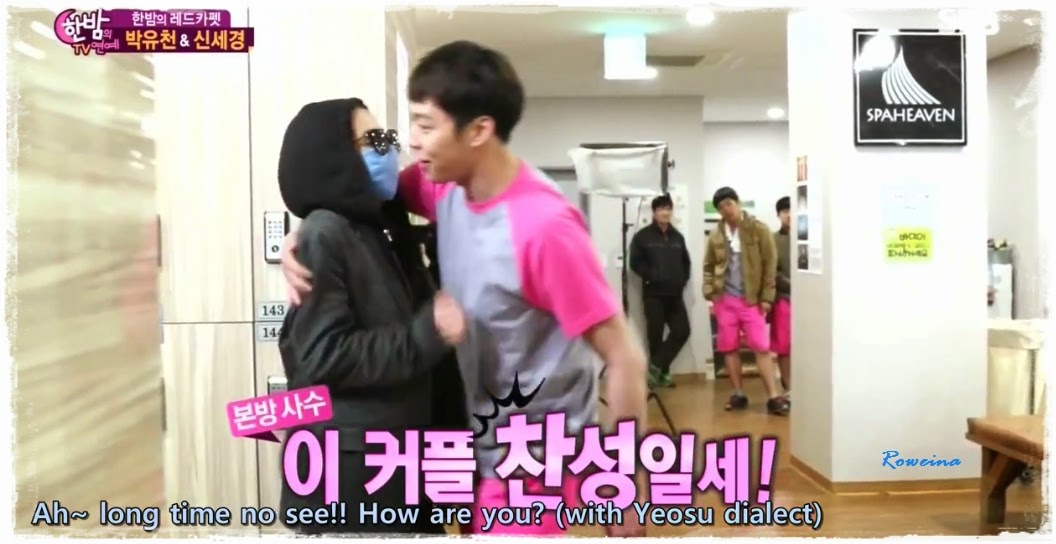 Also got this. SSK’s S Line....I had no idea about it before, hahaha....but then I watched her last movie and ahhh....I get it. So far what we see is Cho Rim always wearing casual clothes. So maybe we will get scene that she wear a dress? It’s interesting to see Mu Gak’s expression. He will like Lee Gak who smile at 1st or go straight into the 2nd pic. Still no expression. XD 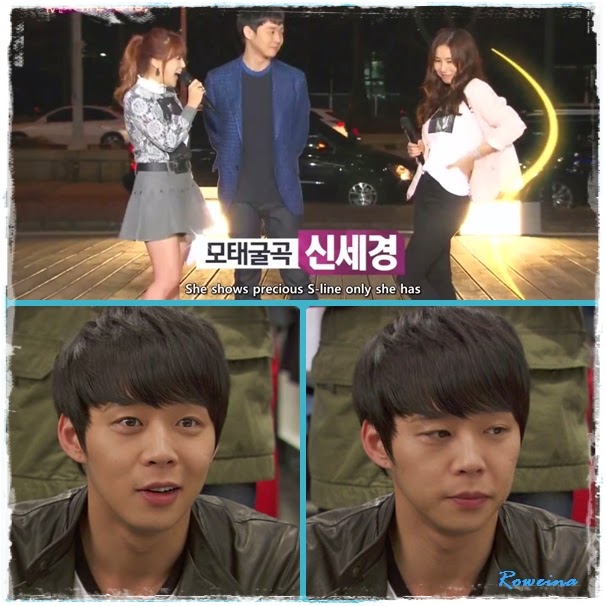 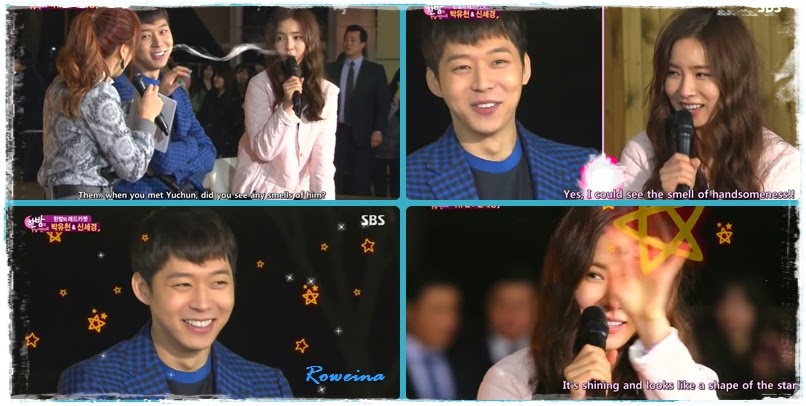 ChunNi’s face looks like saying...why U’re asking that? XD....n SSK’s answer was so funny. Her voice when she made that STAR was so funny.


N today finally the prescon n live radioshow....OMG...It’s been so long he never do radioshow. Thank you again for SBS doing this kind of promo.

They both wear white. It’s a nice dress. 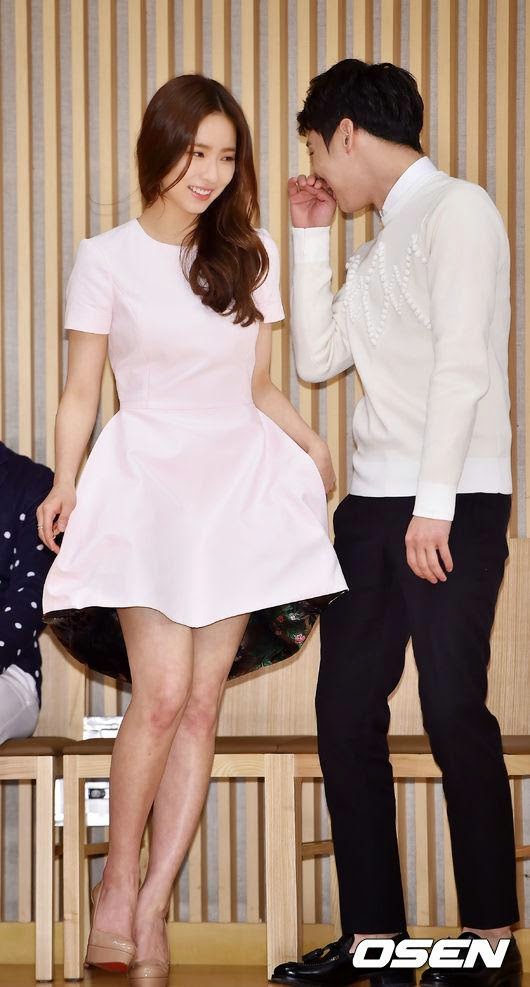 Wahh....both of them said similar thing. Wanna act with him/her. I’m sorry Shin Se Kyungssi to say that I never had a thought about you before.  It was just because I didn’t know you. But actually there were 2 moments that maybe it’s the sign for me that U will be ChunNi’s leading lady. LOL 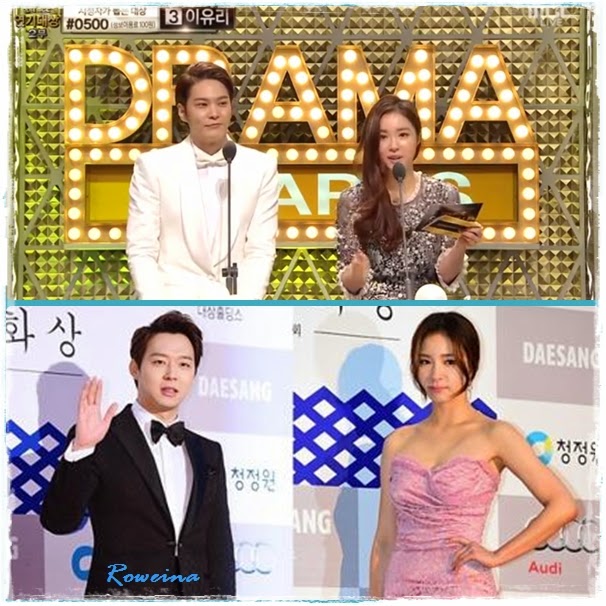 I watched you on this award event coz U were presenting award with my New Bias. XD....(Sorry ChunNi, I should find someone to make me can stay in Kdrama land while u’re not around n waiting for your comeback. Hehe.... I found a lot of similarity (connection) of their character in drama n themselves). When watched that off course I didn’t think anything. I even didn’t remember you were also in Blue Dragon Award. Hehe....So, when I knew you’re become ChunNi’s leading lady. I remember this award event and once again I can make another connection between ChunNi & JW. LOL....

I often watch this show before but after became a Chunsa n knew that it’s so rare can watch him on this program, I stop watching ( he also hasn’t had another project with KBS) coz I think if ChunNi’s news aired on this show, Chunsa will upload his cut version vid. Hehehe... So one day, I open KBS World n I saw this show n saw an artist whose name SSK on their actress profile. A very rare occasion for me to wacth this show n the one that I watched was her. LOL

N about Nam Goong Min, waahh....I didn’t know ChunNi is taller. LOL...I also know U because of Yoo Hwan. Hehe....I like their interaction. 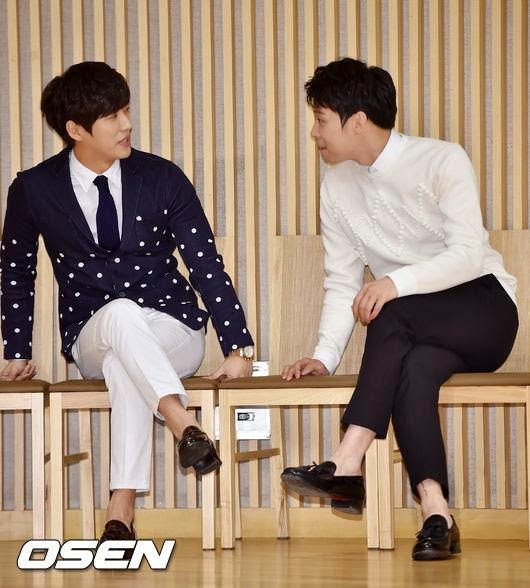 From the 8 min highlight.

It’s about hair but it’s really give me different reaction. 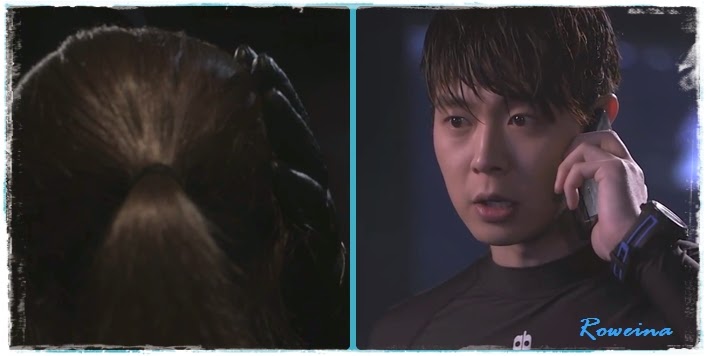 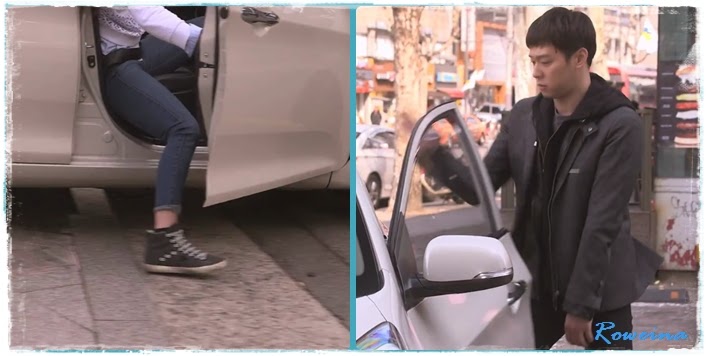 Their 1st encounter is so funny, hahaha....n ah....so that’s Cho Rim’s car. No wonder there are Mickey n Minnie. XD 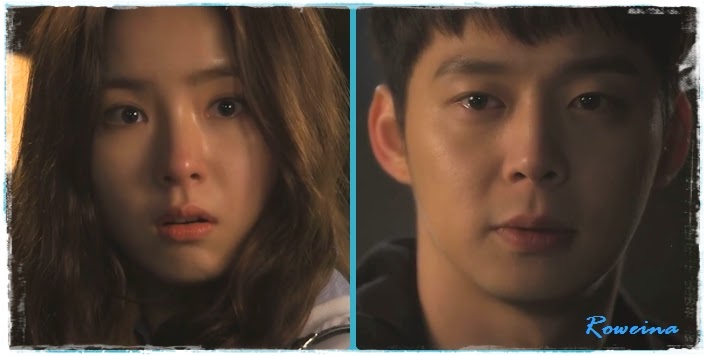 Someone mistaken her as Choi Eun Seol. I can’t read Korean so I’m curious about the name on her uniform. Love Mu Gak's gaze. (EDIT:.....wahhhh, her real name really Choi Eun Sol. So, Mu Gak's sister killed just because the same name.)

N the last one....ChunNi’s sleeping also is a MUST scene beside his eating scene. XD 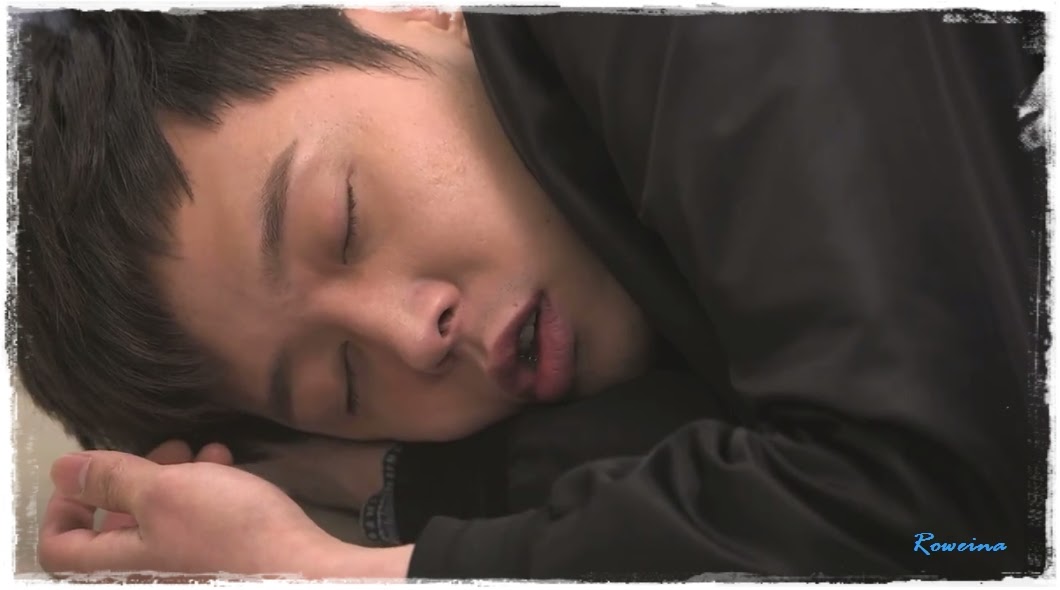 From the highlight, TGWSS really looks an interesting drama. I can’t wait to watch it n before I finalize this article. I write this.


Because Mu Gak is like Brown so I make “the scenes that I want from MuRim”  based on Brown n Cony’s sticker. XD 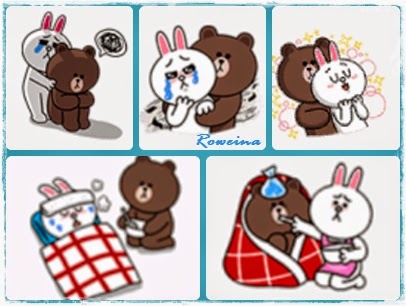 I’m OK for any kind of backhug. Just give me that Backhug. Hahaha.....although I prefer 2 backhug scenes. LOL....From the stickers, I choose pic #1 – Cho Rim is the one who backhug  Mu Gak when there is a problem (it’s similar with the webtoon n I think fit in the story) & pic#3 – Mu Gak is the one who backhug Cho Rim on the happy day when he finally can feel something (love) in his heart.

ChunNi had a scene like on pic #4 before in RTP so it will be nice if we get a scene from pic #5. We know that he can’t feel pain but I think he still can get sick right? XD ....so Cho Rim can take care of him. 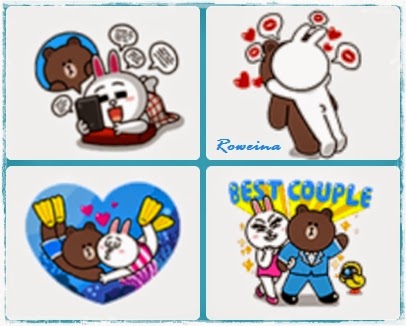 From pic #1, it will be so funny when we get a texting scene like that. Especially when compare their expression. Hahha....

Pic #2 – Mu Gak’s is kinda like LSJ, so maybe we will get 1st kiss scene that it’s Cho Rm who initiate the kiss. N SBS will put that Kiss & Love icon. Hahaha....

Pic #3 – Mu Gak was an aquarist. Even though now he’s is a policeman but our MuRim can doing that kind of date. XD

Pic #4 – I hope ChunNi n SSK will have  great chemistry. I believe what’s Dir. Baek said “"The couple is very unique. The whole story is driven by their unique nature and their difference. Yoochun and Shik Se Kyung's chemistry is also special and unique. Please look forward to them"

Could they win Best Couple Award when ChunNi is not around?

That Best Couple pic also for MuRim as a Partner in solve Mu Gak’s crime case n also when they’re on gag show. 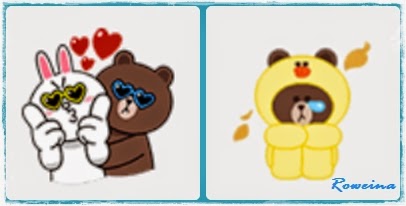 Cho Rim should make Mu Gak wear that bunny glasses. XD...ChunNi wore Panda suit in RTP, let’s see if he wear other thing in TGWSS. He can wear funny thing like that to support Cho Rim in her gag show. XD

I think it’s time for me to reset my mind n welcome Mu Gak....a new character that looks so interesting. N I think I’ll get some scenes that I want this time. So far, already get it from the trailer/stills. Let’s have fun with ChunNi.


The Girl Who Sees Smile.....FIGHTING.

credit pics, translation to the owner.