[TRANS] 140731 Interview 1: Kim Jaejoong, “If only I could have one more kiss scene with Baek Jinhee… What a shame”

Soon after he finished his first drama as the male lead, in media interviews, Kim Jaejoong expressed his affection toward ‘Triangle’. He also added a ‘cute’ sorrow because while busy focusing on revenge, he couldn’t fully cover the melo with Baek Jinhee.
“I have a bittersweet feeling when the drama ended. Actually the bitterness is bigger. I wanted to show more of the brotherhood and the love with Oh Junghee, but as the drama has only 26 episodes, it can’t handle many stories. What a shame. If it had 50 episodes, I think it could convey more.”
“I tried a lot so that Jinhee and I could look like real lovers. In order to get along well, we always keep in touch. Jinhee has appeared on many dramas; she’s good at acting and has deep thoughts about acting. I worried a lot about how we two should act to look like real lovers but we couldn’t show much in the drama. What a shame. It would be nice if we had one more kiss scene… (Laughs) Actually the only one kiss scene in the drama was filmed in the morning of the broadcasting day. Since we didn’t have time, we couldn’t put much effort into it. I wish it could come out more beautifully and ardently. Too bad.”
In this drama, Kim Jaejoong got a lot of attention for his deeper and richer emotions in acting.
“As this is my first drama as the male lead, I wasn’t familiar with the fact that a lot of emotional expressions have to be shown. In fact, Youngdal’s filming part was big. It might have been tough physically and mentally but it wasn’t, as I thought I wanted to experience more in acting. The viewers commented that my acting was good but it’s not easy for me to evaluate my own work. However, I had a sense of responsibility and tried my best. My biggest aim was to enjoy the filming with co-actors and staff. I think the responsibility of the male lead is to create a pleasant atmosphere in the filming set.”
In the filming set, the existence of Kim Jaejoong was like vitamin. The shooting conditions were hard but he created a friendly atmosphere for his co-actors and staff. Thanks to that, they were able to continue filming in the situation that NG happened frequently because of lack of practice time due to last-minute scripts. Kim Jaejoong’s sociability did a great job.

“Because all of us worked without sleeping, I thought I should cheer everybody up. Everyone was suffering; I thought it was irresponsible to show my tiredness. I think aside from acting, it’s also important to light up the atmosphere by comforting them and joking around. I think it was worthwhile [to do it], because my co-actors said it was nice to work with me, that they gained more strength thanks to me.”
“In the drama, there’s a scene where I shed tears while being hypnotized. At that time, I couldn’t sleep and felt very bad because the rating decreased; the staff took care of me a lot. That day, my fans also supported foods and gave out bandaid on the set. Lighting director, sound director… the PDs put bandaid on their necks, their hands, on the back of their heads in order to make me smile. I felt very thankful. I also tried my best to cheer up the actors and staff but I was moved at the thought that other people were also putting a lot of effort. I thought it was ‘affection’ on the filming set, which almost got me crying.”
In every drama, Kim Jaejoong showed his growth as an actor. Especially, Kim Jaejoong on stage and Kim Jaejoong in drama can be considered as different persons. Now the modifier ‘actor Kim Jaejoong’ doesn’t sound awkward at all.
“In the meantime, the problem was, I only reflected on my acting. I thought that I only needed to act well. But it was a wrong idea. I realized that I had to look at the drama as a whole, not only my acting. I think my vision as an actor got wider. I felt deeply in my heart the fact that I had to make it with the drama. I also realized that the hardships I have gone through with acting in the meantime were nothing (T/N: Means this time is much tougher). The more I work, the bigger burden and responsibility becomes.”
Triangle’s ratings have once fallen down to 6%. Slow development, boring and common settings are the main causes.
“Actually, I think not only me but many actors were distressed about the ratings. However, we didn’t show it in the filming set. We filmed in bright atmosphere. What I felt the most thankful about is that everybody said it wasn’t my fault. They encouraged me before I shrank further. Thanks to that, I got to work harder. My part is big but I’m quick at memorizing script. However, because the script came out at the last minute, NG still happened. Even so, I felt thankful that everyone created a nice environment so that I could focus.”
Kim Jaejoong digested perfectly the character Huh Youngdal because he understood and well interpreted the drama.
“Because I was too immersed into the character, it was hard for me to record for JYJ’s album. My members also call me Youngdal. I think I recorded with Youngdalie’s feeling. This drama taught me that a male lead can feel all kinds of human feelings - joy, anger, sorrow, and pleasure. There was much burden and pain mentally.”

Kim Jaejoong is easily moved to tears. Playing a Youngdal who lives a tough life, he even cried desperately.
“I cried often. (Laugh) I’m the type that can cry endlessly without limit. Of course I don’t cry over small things, I only cry when I have extremely hard times. However, because I cried too much in this drama, I think my tears won’t come out anymore. (Laugh) I cried the most when I acted as being hypnotized. Not the drama but the thought of being alone in real life after filming made me cry. I should have a drink and go to sleep but I didn’t have anyone to drink with me. There was always this repeated feeling “So I’m alone again?” Suddenly the thought of being alone got me crying. I cried very hard. (Laugh)”
In the first episodes of the drama, Kim Jaejoong messed up his image on purpose. He naturally played a Huh Youngdal who was running in town wearing only underwear, who could become a ‘gigolo’ to gain money.
“Actually, I was firmly prepared for the messed-up parts. I tried to do anything the writer and the PD wanted. To be honest, I could even do more. (Laugh) Before filming ‘Triangle’, when I practiced, I thought that it would be awkward if I tried too much. Youngdal in my thought can’t be different with Youngdal in PD-nim’s thought. So I started with the thought that I should play a Youngdal that PD-nim wanted. Thanks to that, I could act comfortably. I first met Baek Jinhee while wearing only boxers, but I didn’t feel embarrassed at all.”
Kim Jaejoong added, “There were many funny things, so I really enjoyed it.” Acting in this drama, Kim Jaejoong has become close with Lee Bumsoo who acted as his big brother, ZE:A Im Siwan who acted as his younger brother and Baek Jinhee who acted as his lover. He’s especially close with Im Siwan. They kept in touch even when Siwan didn’t have filming schedule.
“Bumsoo hyung is a big sunbae but he’s not the type who would admonish me and Siwanie in acting. Should I say he just leave it to us? Siwanie has many ambitions toward acting but he’s the type that takes care of co-actors a lot. We talked a lot about each other’s acting and we’re also close in real life. We might have competed with each other, but we were busy embracing each other. Siwanie will start filming Misaeng. I’m thinking of visiting him on the set. (Laughs)”
After his debut with TVXQ, then JYJ, now as an actor, his active field has widened. Recently, after the new [JYJ] album was released, the album created a sensation on music charts. After finishing his drama, he started to prepare for JYJ’s world tour. Along with JYJ activities, he will consistently continue acting activities.
“It’s good to be a singer but I’ve got a new interest called acting. I have lot of worries and have to make a lot of effort but I enjoy it. It’s interesting to be able to live many lives. I’ll continue acting.”
Source: OSEN via Naver
Translated by: Hannah @ PrinceJJ (@The_Little_Pear)
Shared by: PrinceJJ
Please take out with full credits and in accordance with our rules.


Jaejoong, a member of the K-pop boy band JYJ and an actor, talked about how he acts in a relationship during an interview with local media outlets on Wednesday.

Comparing himself to his character Youngdal, the fledgling actor said that he is honest when it comes to love.

“Just like my character in the drama ‘Triangle’ who gets into fight or conflicts outside but becomes a shy guy in front of his love Jung-hee, I am honest. I cannot hide my feelings or have a poker face when I love someone,” Jaejoong said.

On top of that, the popular idol was asked to give three reasons why he makes a good boyfriend.

He replied, “I am a guy who thinks before he talks. And I am not shy about being physically intimate with my girlfriend. Also, I spare no time, effort, power and money for my love. That’s why I am a decent guy.”

In the TV series about separated brothers who are reunited after 20 years, Jaejoong gained acclaim for his sophisticated acting.

Meanwhile, his group JYJ made its long-awaited comeback with its second studio album “Just Us” and the music video for the title track “Back Seat,” released on July 29.

JYJ is to hold the third “JYJ Membership Week” expo in Seoul from July 31 through Aug. 3 for its fan clubs. The event has been held annually in the capital for free since 2012, drawing more than 20,000 fans each year from home and abroad.

The band is also scheduled to embark on its Asian concert tour “The Return of the King,” with the first concert to kick off on Aug. 9 in Seoul. The idols are set to visit eight cities across Asia including Hong Kong, Beijing and Shanghai. 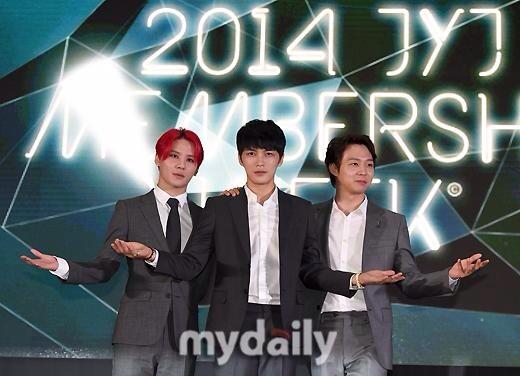 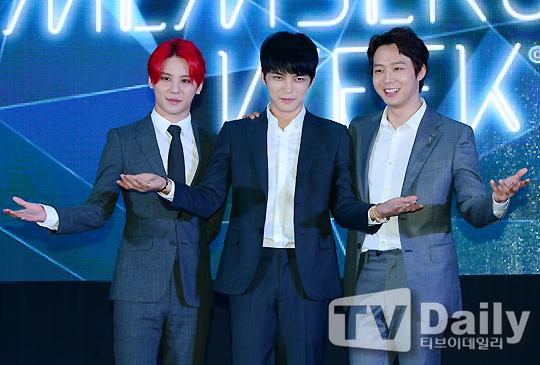 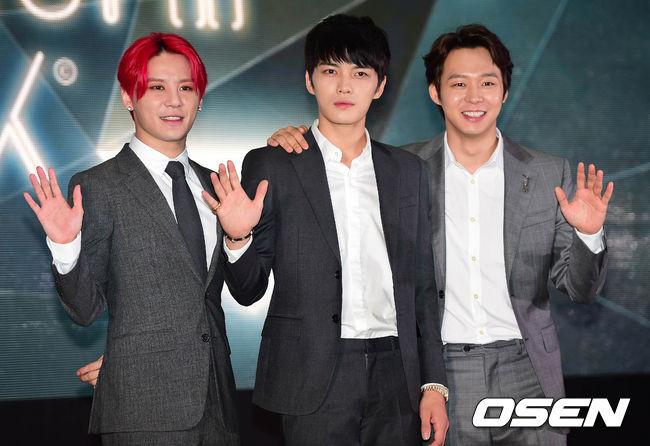 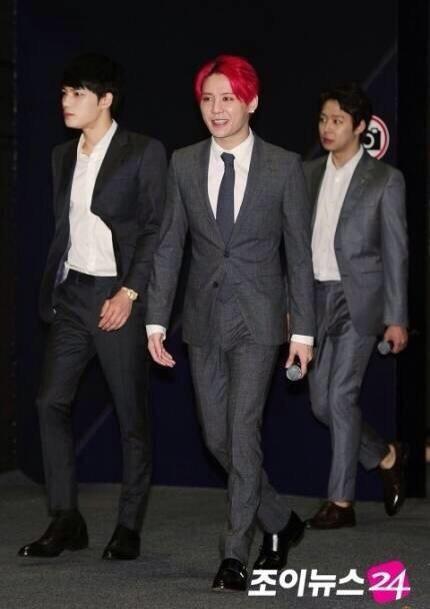 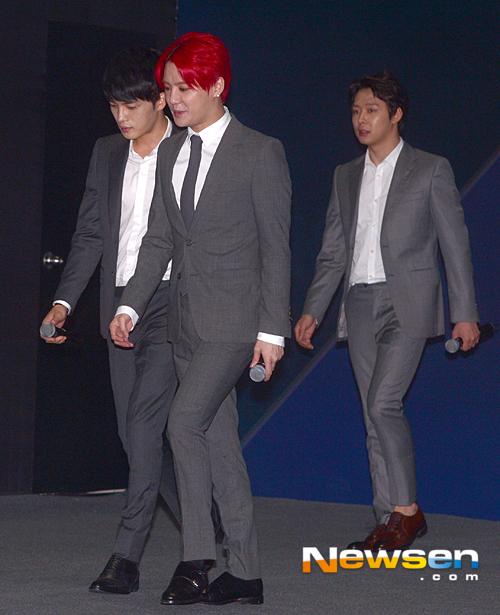 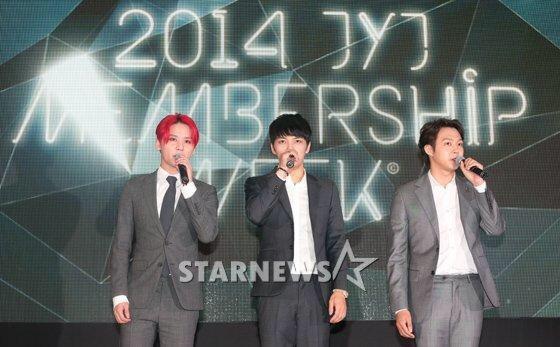 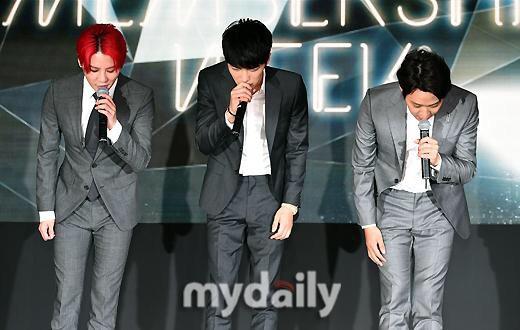 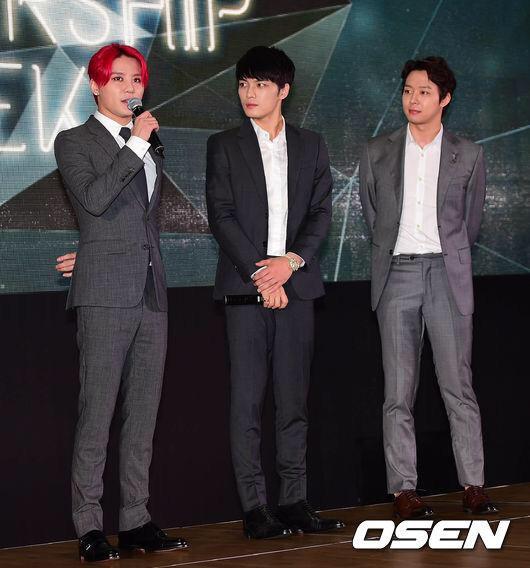 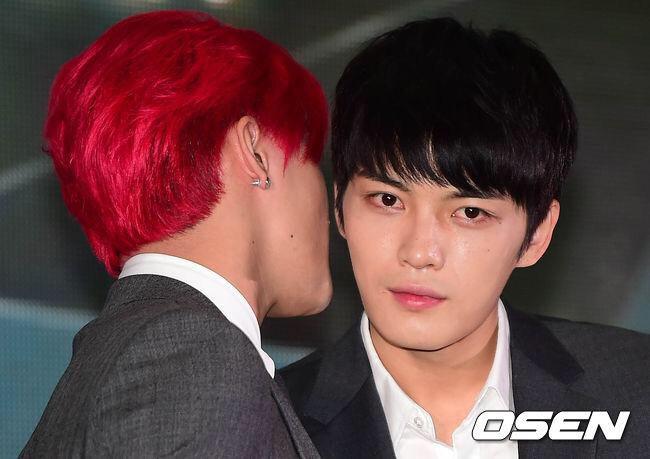 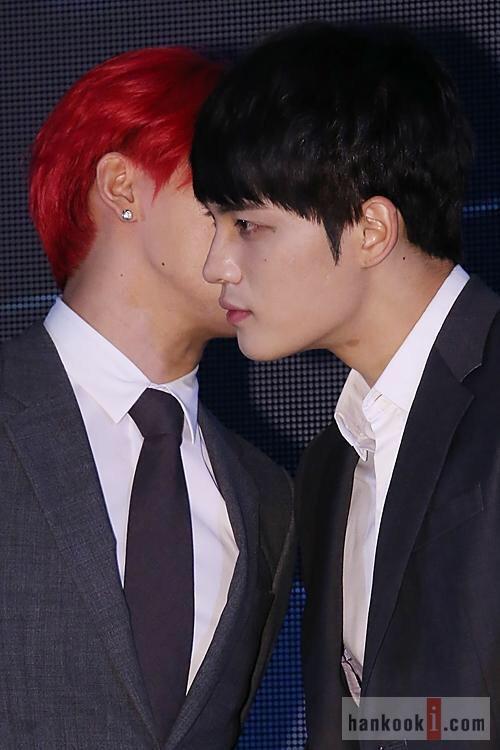 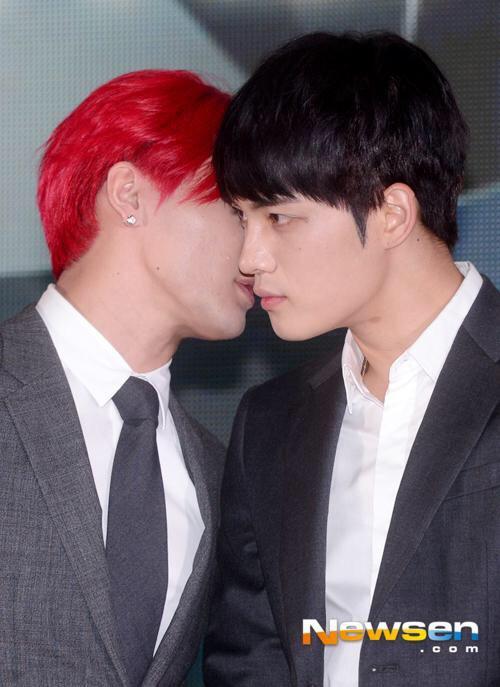 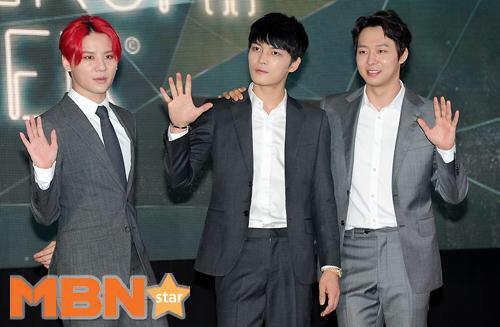 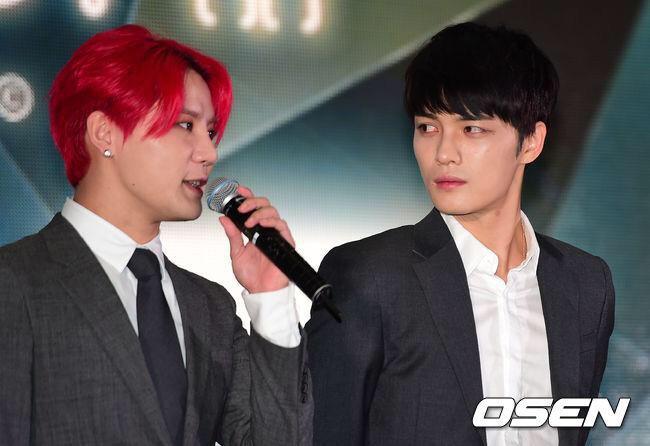 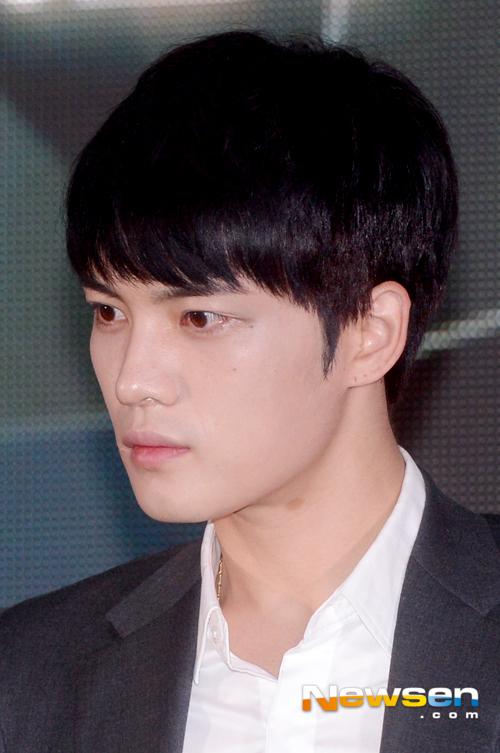 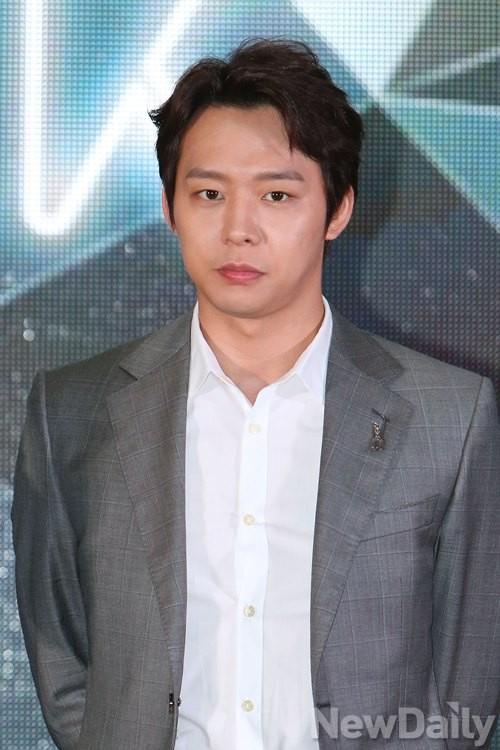 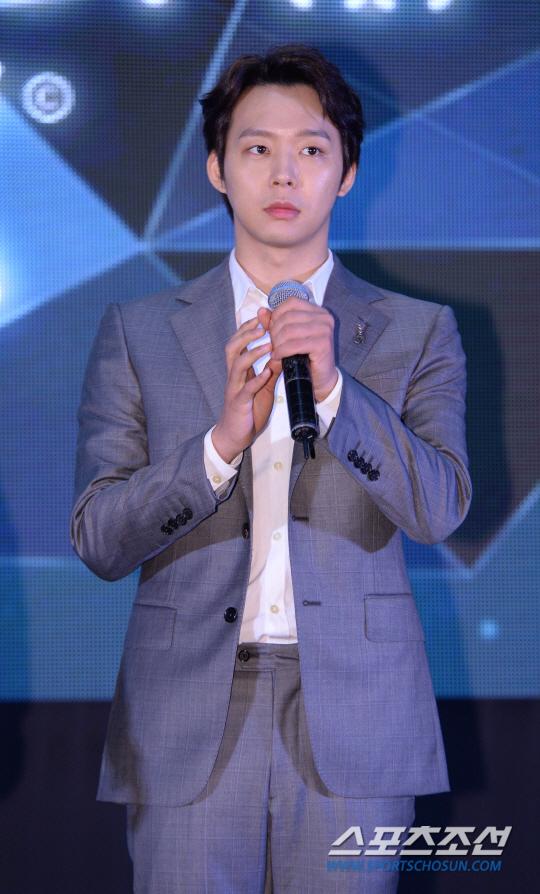 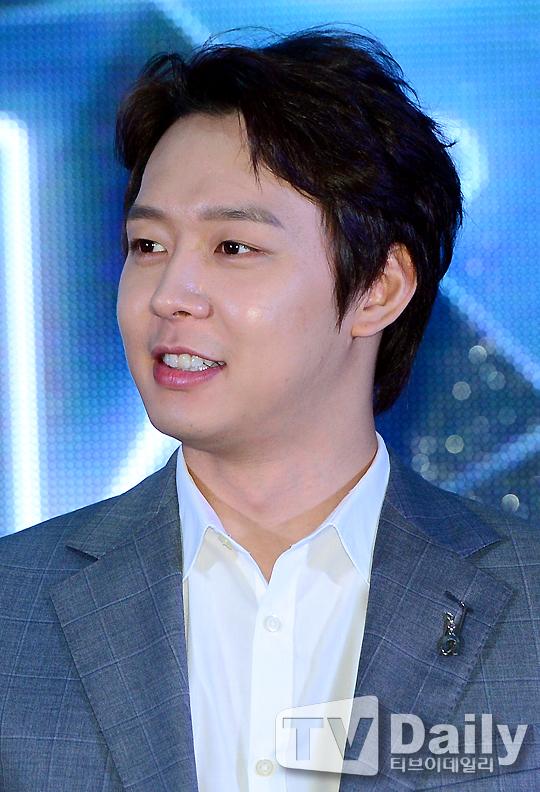 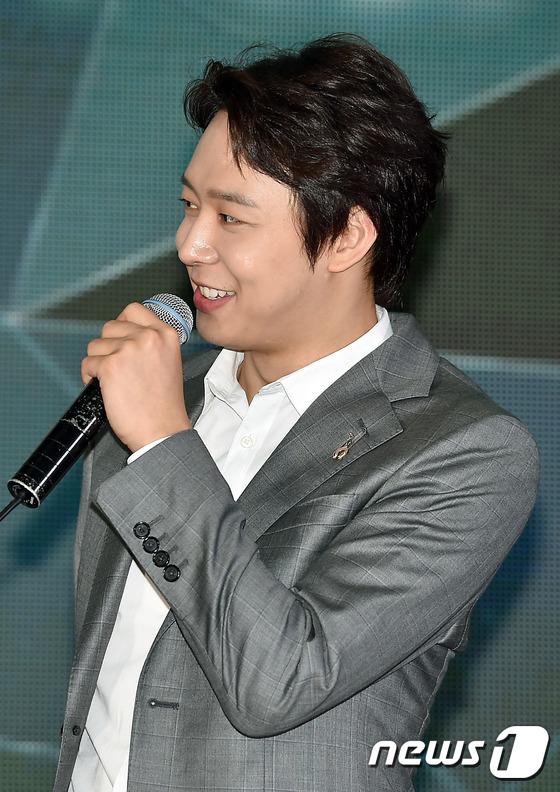 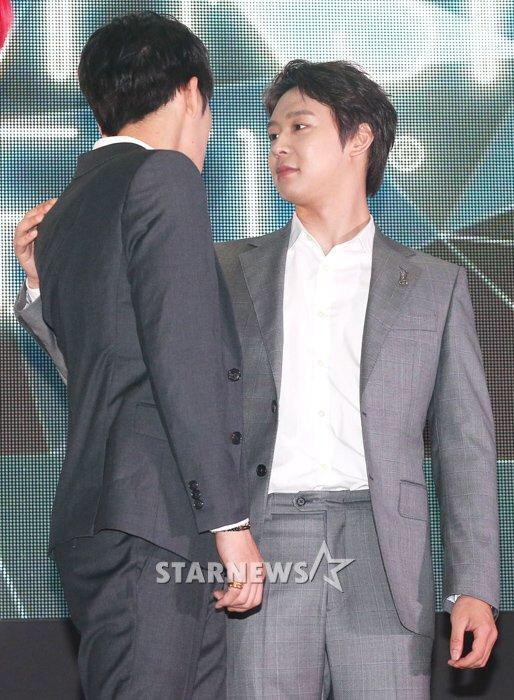 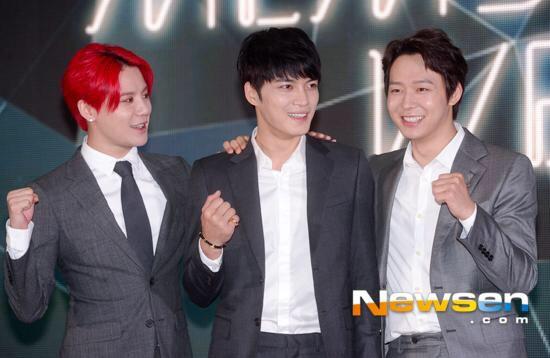 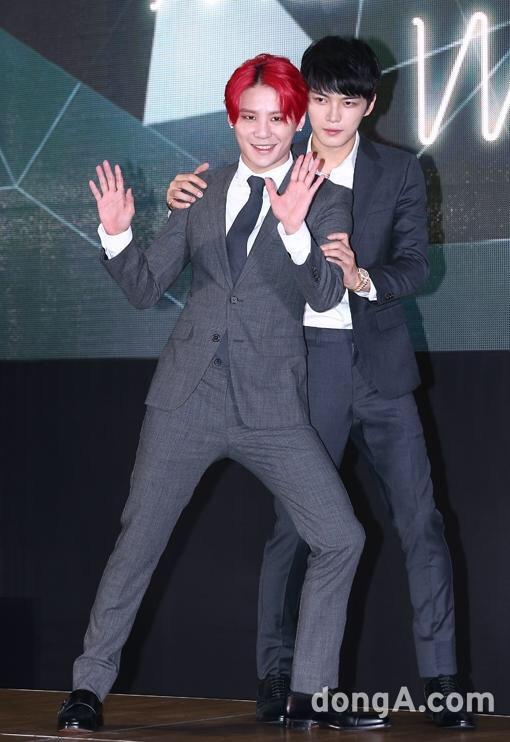 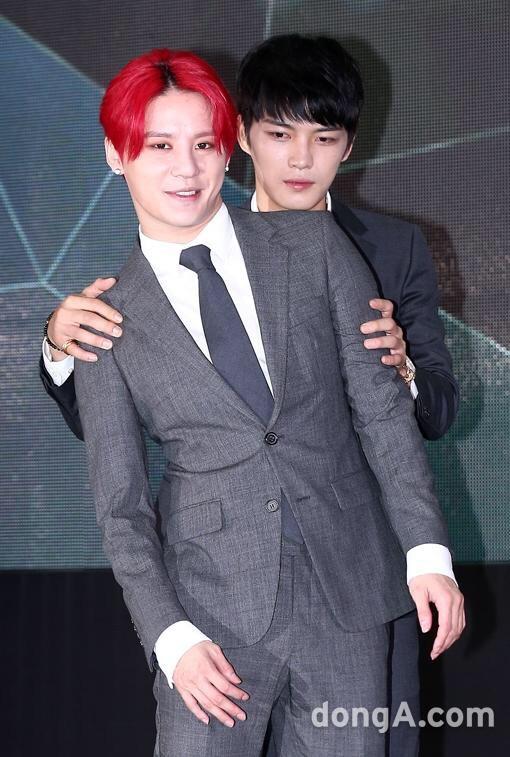 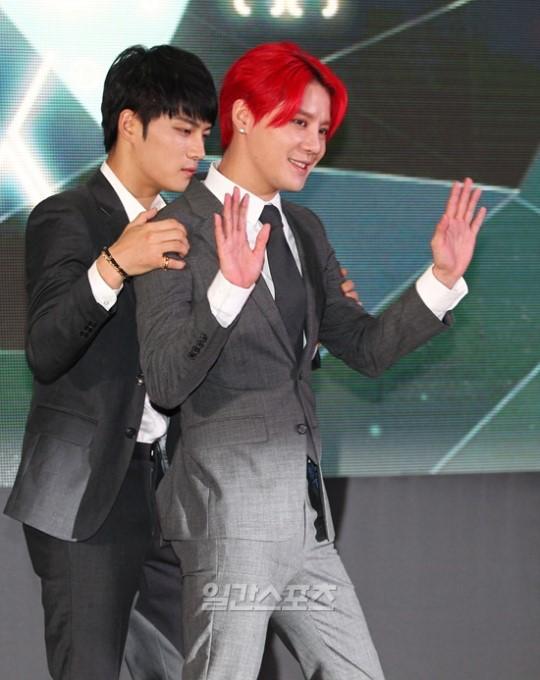 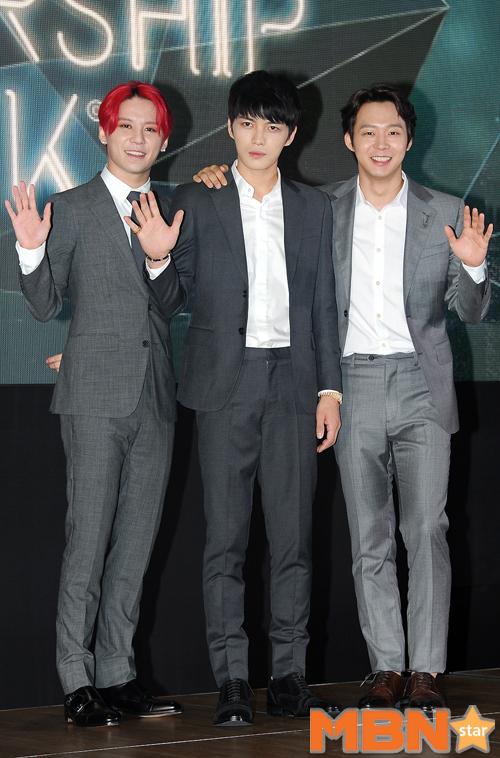 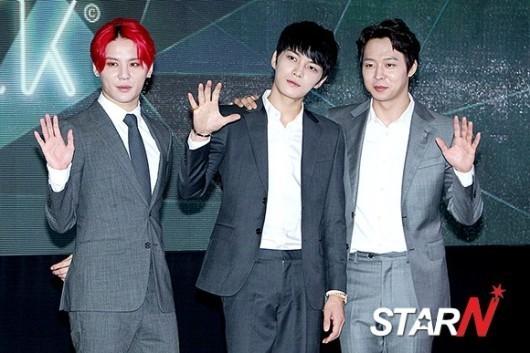 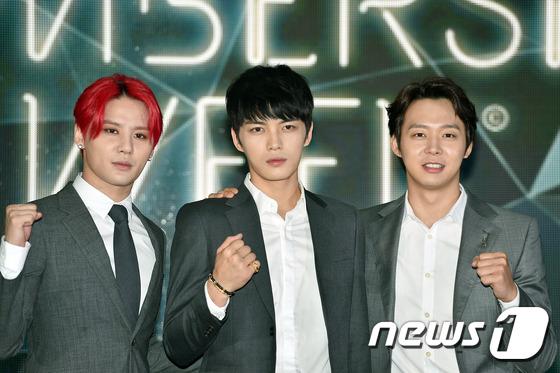 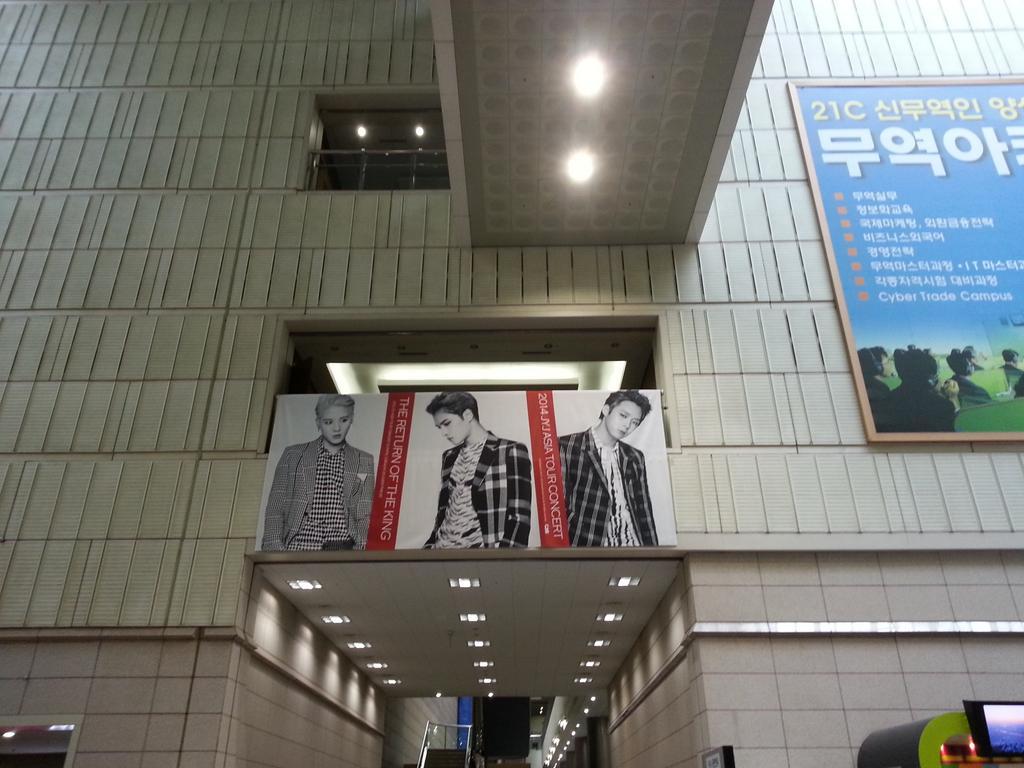 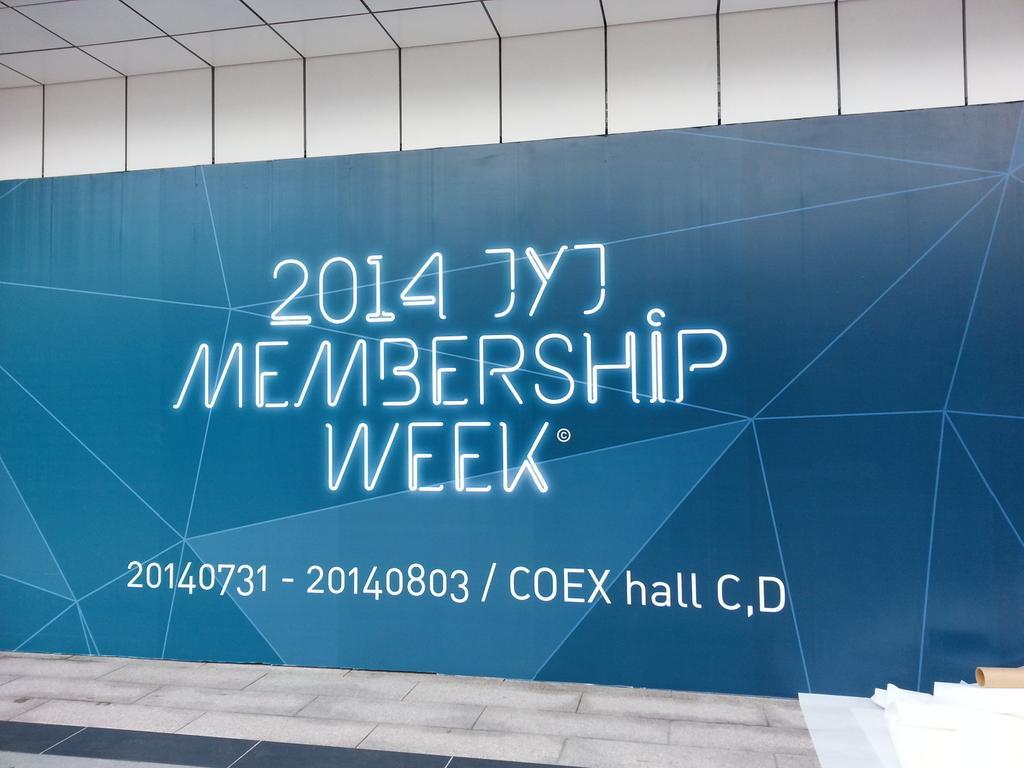 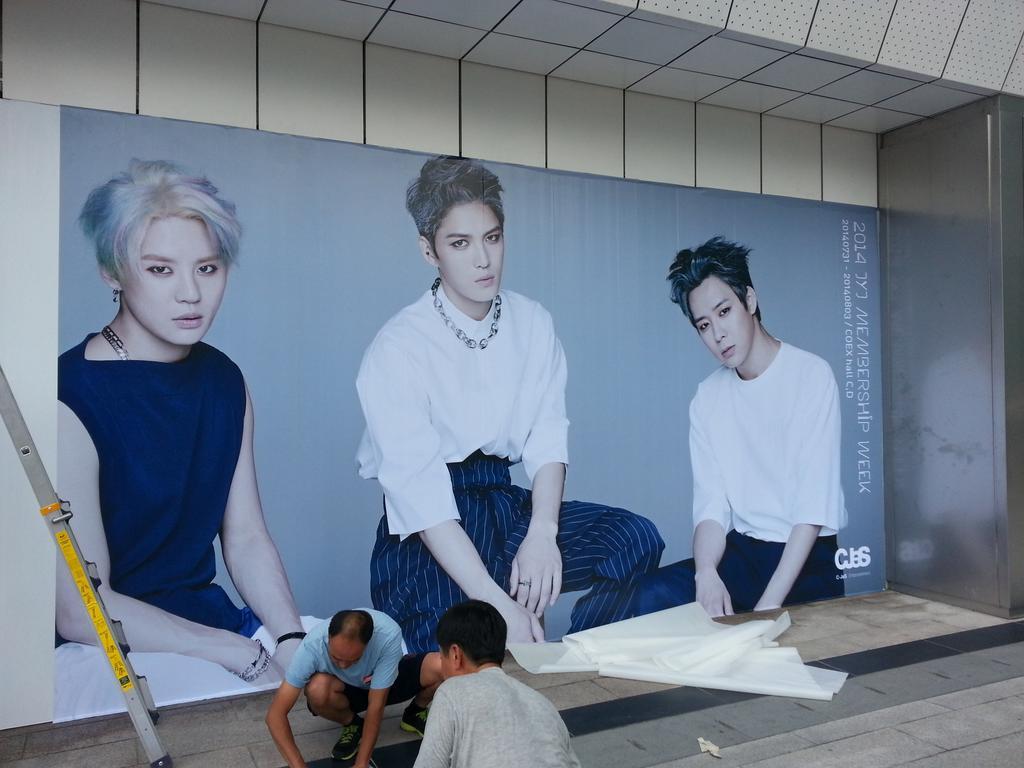 Group JYJ held the opening ceremony of their 2014 JYJ MEMBERSHIP WEEK at COEX Hall C in Gangnam, Seoul on July 31 and welcomed their fans.
Starting in 2012, JYJ Membership Week welcomed its 3rd year this year.
In the space of more than 5000 pyeong, the event can allow fans to see with everything related to JYJ; like their new album’s music video with the club where fans can enjoy JYJ’s music as much as it being decorated under the theme ‘Everything about JYJ and their music’ and its jacket filming set; JYJ showing their music videos in the back and performances all the while; dressing rooms that display over 600 pieces of costumes, and etc.
JYJ Membership Week takes place for a total of 4 days, from July 31 to August 3.

***
Welcome all their fans

Sit and have a chat in the cafe

The scale has gotten 3 times bigger than last year

Photo viewing of the members in waterfall screen tunnel