Junsu's mom shared a picture with JS for fans...
https://twitter.com/zunoxiahmom 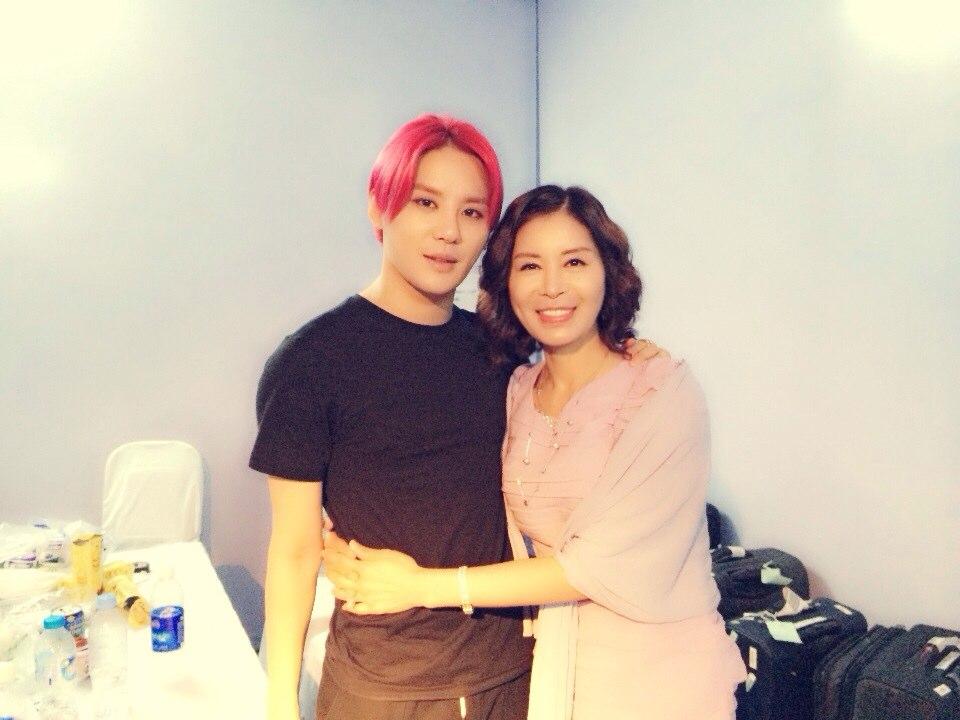 Kim Junsu's business cards for his Toscana Hotel in JeJu

Jaejoong signing his autograph for a reporter (after concert)
Pics and vid From VN reporter
http://baotinnhanh.vn/vi-VN/t221c292p224373/Doc-quyen-hau-truong-Jaejoong-tai-khach-san-sau-Concert.htm 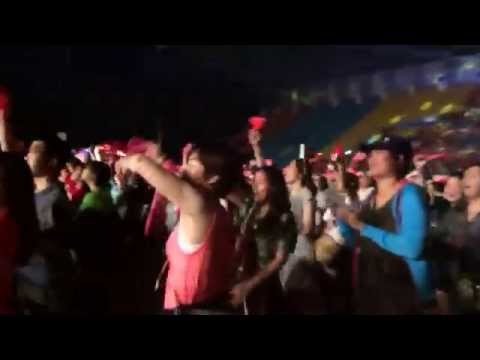 Group JYJ created a special encore stage with Vietnamese fans in heavy rain.
On August 31, C-JeS Entertainment disclosed, “JYJ successfully completed the Vietnam concert of their Asia Tour in the midst of 6000 Vietnamese fans’ cheers at Quân khu 7 Stadium in Ho Chi Minh City, Vietnam on August 30,” and, “In particular at this concert held in an outdoor venue, singer and fan becoming as one created a splendid sight, even amid pouring heavy rain on the encore stage”.

JYJ is famous as the team gaining highest popularity among Hallyu stars in Vietnam.
On this day fans, who gathered from across the nation, sang along to songs in Korean and enjoyed JYJ’s concert.
One fan saw JYJ who she’s looking upon again in 4 years, and choked back her tears.
On this day, JYJ opened with live stages for all of 24 songs; like title song ‘Back Seat’ and their 1st regular album’s title songs ‘In Heaven’ and ‘Get Out’. As a talent band they also showed off a variety of colorful stages –such pop, rock, dance, R&B– within their own solo performances in a group-like way and captured local fans’ hearts.
The encore stage became an unforgettable memory for everyone, singer and fan.
Although everyone got drenched in the rain, they enjoyed the concert. JYJ said, “The rain came but we got more excited. It became a sexy stage because of the rain” and “It seems we’ll never forget the time we spent with Vietnamese fans”.
Passing through Seoul, Hong Kong, Beijing, and Vietnam, JYJ’s Asia Tour will continue onto Chengdu, China on September 6. [TRANS] Rain, Rain~ We had a very good time because of you!!
Yihihihihisisihisihi!!!!
I’ll never forget this concert in Vietnam in my lifetime~~
Thanks, Rainㅎㅎㅎㅎ
[T/N: '이히히히히시히시시히시히!!!!' is not a special expression.. It's just an expression of his nice feeling.. There's no special meaning..;;;]

[TRANS] JYJ concert in Vietnam today! Wet field!
It was exhilarating. Had a great time. Thanks a lot for everyone’s hard work ㅋ 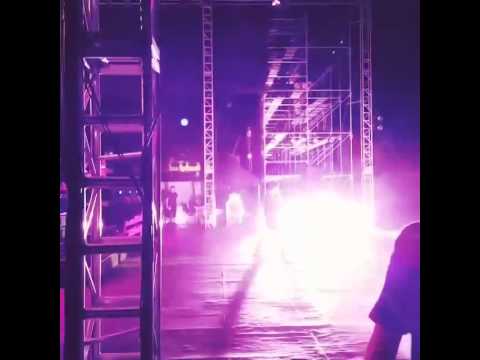 Any Vietnamese JYJ fans out there? JYJ members have uploaded photos of themselves wearing Vietnamese traditional hats, or “nón lá,” while they were rehearsing for their Vietnam concert.
During their rehearsal, JYJ members wore Vietnamese traditional hat known as nón lá. It is known that the hats they wore were made by their Vietnamese fans and given to JYJ members as gifts. Vietnamese fans were touched when they saw the photos that JYJ members uploaded on their SNS on August 30.
Group JYJ kick started their Asia Tour for their 2nd album “Just Us” on August 9 in Seoul. They have since then completed their concerts in Hong Kong and Beijing with Vietnam next on their list. JYJ will hold their concert in Vietnam at 8pm on August 30 at Quan khu 7 in Ho Chi Minh.
Meanwhile, the title song of JYJ’s 2nd album “Back Seat” has topped many online charts, with more than 120,000 albums pre-ordered.
Source: Ten Asia , TV Daily
Koreaboo [TRANS] So many great people ~

The 3 men from group JYJ have a showdown of charms in 3 colors.
On the morning of August 29, OBS ‘Unique Entertainment News’ captured JYJ on camera departing through Incheon Airport for their concert in Vietnam.
On this day, Park Yoochun attracted attention with styling that displays his dandy charms to its advantage in a neat white shirt and black suit pants.
Next, Kim Jaejoong showed off revealing fashion, being the most glamorous and sexy out of the members, in a gradation T-shirt, baggy pants and impressive sunglasses with a red frame.
Lastly, Kim Junsu added chic charms in an outfit that can easily be deep/profound, giving a point with a blue jeans jacket unified with black from top to bottom.
[T/N: Junsu's shirt says "DEAR KARMA, I HAVE A LIST OF PEOPLE YOU MISSED"]
Meanwhile JYJ are underway with their 2014 JYJ Asia tour ‘THE RETURN OF THE KING’.
Source: OBS News
Video Credit: OBSKyungIn
Translated & Shared by: JYJ3 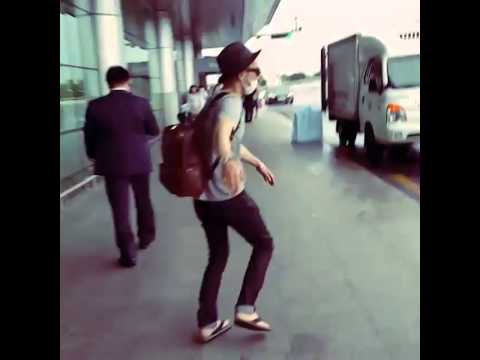 JJ enjoying a go-cart in Jeju 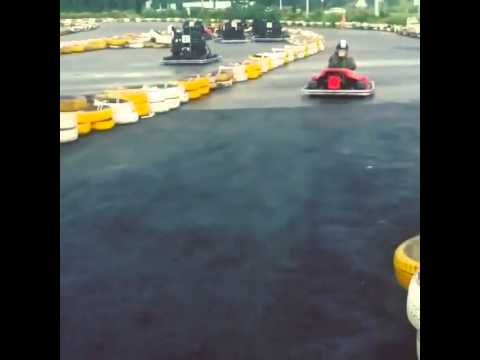 Triangle DVD Now Available for Preorders at various online sites...
including at http://t.co/ufWgFaAGv0 (Spoiler Included)
#1. “This is the first class!” – Engine room was the first class of the ship ‘Jeonjin.’
Engine room is the heart of Ship ‘Jeonjin’ and the place where ‘Hong-mae’ and ‘Dong-sik’ fall in love.
‘Dong-sik’ brings ‘Hong-mae’ who tries to hide from a fishery patrol ship to the engine room. He handed a blanket, a pillow, and napkins to her. Then, he said in Chungcheong accent, “This is good place~. I will make a bed for you, then this place becomes the first class of this ship~. You just take a rest here~.“

‘Dong-sik’ also said to ‘Hong-mae’ who gobbles up Bbanggamae (It refers to ramen noodles. Crewmen call it  ‘Bbanggamae’ in Korea.) that ‘Dong-sik’ made for her, “Actually, original Bbanggamae is all about seafood. You should put crabs, sea squirt, octopus, sea cucumber, and oyster in order to make original one. You also put hot red pepper to make it tastes better. That is the real and original Bbanggamae of crewmen. You know what I mean?”

#2.”Sea fog is gently coming.”
The scene the section chief of maritime police ‘Chief Kim’ looks through the ship ‘Jeonjin’ after he finds out something fishy is going on in the ship arguing with captain ‘Kang’ maximizes the feeling of tension in this movie.
In addition, line of ‘Chief Kim’ saying “Sea fog is gently coming. I will see you guys on land.” is chosen as one of the greatest lines in the movie since this line was used as a foreshadow of unexpected accident that happened to the crewmen.

Q. How was maknae Park Yoochun in his scenes?


A. He acted to expose his bare skin. He didn’t have any difficulty [with it] at all. He deserves getting praised for that kind of courage. It is his debut work in a movie and he completely exposed his bare skin. He has the aptitude for acting.

-Singer-cum-actor Park Yoochun had his first debut onscreen with ‘Sea Fog’. The idol-turned-actor had set out as the movie’s protagonist, evaluate his acting as a sunbae(/senior)


“I discovered friends called idol-turned-actor lately starring a lot in whether movies or dramas, etc.. I don’t think this current situation is bad, sometime ago. I’m envious of the ways they rather dance well and are good at acting as well. For the instance like Yoochunnie, I thought his learning abilities are quick. It was much easier [for him] to accept what was written in scenarios. He was full of senses too. He must have been born with these components, I think it is innate for Yoochunnie. I’m looking forward to the acting he’ll put forth in his next piece of work.”

[TRANS] I enjoyed watching musical ‘Chicago’^^
I felt happier as there were so many actors who performed with me in ‘December’, and even Choi Jungwon-nim and Ivy-nim were there!
Songs were so good but I felt more excited because the music was mainly composed of wind instruments, not string instruments.
The mood of Jazz and the dynamics of tempo were also nice~
*

[TRANS] Above all thing, while I was watching it, I thought I also want to perform the musical which I can dance as much as I like.
I truly hope to dance on the musical stage.
Actually, I’m more confident about the dancing than singing a song… cryㅜ
Anyway, thank you so much to actors of musical ‘Chicago’ who gave me energies.
***

[TRANS] I’m uploading this only now~ this was when I filmed the shadow scenes ㅎ
I didn’t wear the grandfather maskㅎ
‘Welcome, enter, if you please’~
Behind cut!

[TRANS] My world stops without you..

**
T/N: This is when Jonathan arrives at his castle. A giant shadow of Dracula is projected on the wall as he says ‘Welcome. Enter, if you please’
***

[TRANS] Korokoro
(ころころ-means he feels his face is chubby..;;;)

Note: Earlier, Jaejoong updated his Instagram, but then deleted the post right after. He posted the following video:
--

[TRANS] Korokoro (ころころ-means he feels his face is chubby..;;)

[TRANS] OMG~ I wanna eat that!ㅜㅜ I wanna go there 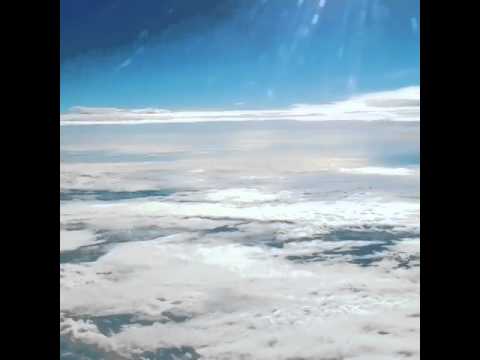 [TRANS]  Hope to walk-sung by Cho Yongpil
Wow.. what a true masterpiece is..

JJ posted this video on IG but has since deleted it...
Song is Sun and Moon

But later posted this video 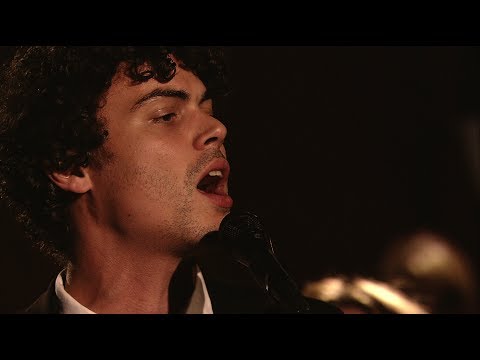